by Darleen Proud
No Comments on Timberrrrrrr……

Clearing the block was certainly an experience! We were given Pastor William’s contact details and met with him on the Wednesday afternoon. He advised us the rate was 7000vt an hour (about $85 AUD) and the 1 hour travel time each way also chargeable.

We had a couple of false starts as to when the backhoe was going to turn up. Finally, it arrived at about 1pm last Friday. The owner of the backhoe is William, the driver David and the guy on the ground Frankie. I explained to Frankie what we wanted and he relayed that to David. They got so much done in those first 4 hours! Amazing. When William and the machine arrived, we stood by watching it push down trees and make clear ground where once there was rocks and bush, William asked if we had a chainsaw… I advised not yet, that is was on the list.

He said he would go and get his, and 2 hours later one of the boys came back with one and started chopping the felled trees.

As we will be relying solely on solar power we need the entire back half on the block cleared so that those lovely panels can soak up the juice. The front of the block is so pretty and we wanted to cut down as few as possible. We just had them clear the build pad areas. ( hmmmm…. I still haven’t put the plans up have I…?).

They turned up late on Saturday morning, about 9am and as David was not well the other driver was having a go… he worked much slower and I sent them home after 2 hours. They came back on Sunday morning and David was all better! Woohooo! The trees where the bar and kitchen will be were very tall and skinny. Scott had the idea that they should come around to the beach side and push them back to the cleared area, so that they did not damage the lovely trees at the front. Good thinking 99! They put in a full day on Sunday.

On Monday Scott dropped me out at the block at 7:30 and had to go back into town to do a few business admin things before flying out that afternoon. So I was there at 7:30 and the boys did not turn up till 10:00. By 3:30 the trees were all done, cut into pieces and we had 2 piles for burning and 2 piles of hardwood for building or future pizza oven fuel. I want to build the chicken coop myself and figure I can use what is there instead of having to buy all of what I will need. 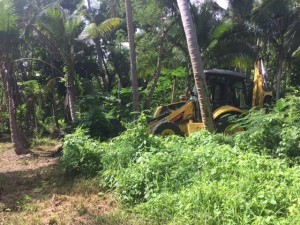 And the fun begins!

At 3:30 they started on the back block and at the speed of light the car park was born! At about 4:20 one of the hoses on the machine snapped and they said they would be back in the morning to fix it and continue. I said if the machine is still ‘drivable’ we would leave it as is. Off they went.

So 22 hours of backhoe time and 154,000vt and we are much closer to getting the building started!

I have heaps of photos, so I will pick out the best ones to include in here for you.

Scott flew home Monday afternoon, so he did not get to see the work on the back block… only pictures.

Also need to mention we found and bought a car/truck last Friday. It is a 2013 Isuzu DMax. It feels like a monster to drive, I’m sure I’ll get used to it.

That’s it for now…

PS I am having IT issues here, have not been able to get into our website to post… I wanted to put more photos on here, but a cannot upload any more just now. still working on a solution… will post again soon 🙂

See you in Paradise