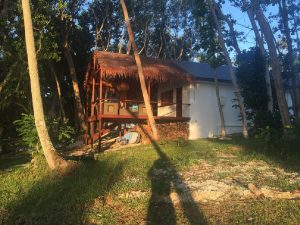 by Darleen Proud
No Comments on Josie!

A couple of nights ago we heard a big crack in the bush beside our place (Bob’s place we are renting). I noticed there was a coconut tree hanging in the branches yesterday at lunch time. When coconut trees fall, usually from old age in the wind, the locals have a saying that equates to “The tree wants you to have a drink”.

I went up to see Josie in the afternoon to let him know there was some fresh coconuts available. Josie lives in a house he built at the back of Bob’s place. He has been working with Bob for over 2 years. He helped Bob find the perfect block of land and helped him build the house and now looks after the grounds.

Josie’s kids, all boys, (pikininis) his nephew Carl, eldest Odino, middle Yano and youngest Oniel, appeared on the patio this morning after breakfast giving us 3 drinking coconuts, peeled and ready to pop. Carl had climbed up a tree yesterday and they came down to give us some! How sweet is that!

Josie was there a few minutes later to check out the fallen coconut palm. He borrowed our bush knife to slash a path into it. I followed him in and threw the coconuts out to Carl.

Scott and the kids watching Josie

Then Josie grabbed a stick and sharpened both ends and peeled one for us, I got it on Video, check it out…

Then he showed us how to get to the coconut water once peeled, another video for that…

And then Scott had a go at the peeling thing, a bit of practice and he’ll be a wiz

Can’t get fresher than that on a Sunday morning! Yum…