In the last few weeks the focus for construction has moved back to our bungalow. The goal is for us to move in and reside permanently in the bungalow the first week of October 2016 … saying goodbye to renting Bob’s house.

Check out the video taken earlier this morning. It shows me walking from the road down through the front block to the ocean … https://youtu.be/yaJby1OGpNY

Sadly in the last week Abbie, one of the village bakers, lost his wife. It came as a surprise. She died on Friday night, and was buried on Saturday. A very quick process. Part of Vanuatu custom is for the village to mourn her passing for five (5) days. Lots for us to learn about the local culture. We don’t want to just be here. We want to be part of the community, understanding the culture and the Vanuatu way of doing things. To add to the local community, through employment, and sharing local history and cultural knowledge with our family, friends and guests.

Scott from Mangaliliu in Vanuatu

by Scott Proud
No Comments on CONSTRUCTION PROGRESS

This short video is of the building site.

Lots of landscaping ahead for Darleen and me.

For this short video you start at the ocean, and walk up towards the wine and tapas bar.

Building in Vanuatu at Mangaliliu you are not permitted to build a solid structure within 30 metres of the median high water mark. So the front edge of the wine and tapas bar and our bungalow are on the 30 metre line.

As you can tell … we wanted to be a close to the ocean as possible.

The next four (4) videos give you a construction update of the four (4) main structures.

Excitement in the Village…

by Darleen Proud
No Comments on Excitement in the Village…

There has been excitement and anticipation in the village for a few months, with weekly fundraising activities. 30 people from Mangaliliu Village, mostly ‘Mummas’ with a few younger girls and a couple of young boys have been planning a trip to Fiji. I understand it is for a Cultural Exchange… learning about each other’s village life and handicrafts they make.

Our house lady, Leisong, is one of the Mummas going along. When she was here last week I asked her how she was getting to the airport on Sunday and if she would like a lift. She said that would be great. I asked her what time I should be in the village to pick her up and she said 9 in the morning. So I set a reminder to ensure I was there by 9!

At 6am I missed a call from her, then got a message saying she was ready now… so off I went (even before I had had a coffee, apparently 9am was a guess…), the village is only a couple of minutes’ drive up the road. When I got there the grounds outside the church were a hive of activity. All the Mummas were in matching blue Island dresses for their adventure, they were loading all the suit cases into the back of a public transport vehicle. These are usually 4×4 utes with a cage and tarp over the back part, and act as buses for the locals to get around the island. They were also waiting on a couple of Island buses to transport most of them to the airport.

Mangaliliu Village outside the church

After about half an hour the buses arrived and everyone had said their goodbyes, and off we headed in a convoy to Bauerfield airport. 2 public transport vehicles, 2 bus loads of Mummas and someone from the village driving a duel cab ute like ours, all full of the excited travelers and some family to see them off. The 4 ladies in my car chatted and laughed all the way, I wish I understood their language. We arrived at the airport all at once and the buzz was palpable. Most of them have never been in a plane before let alone gone to another country!

There were small group photos being snapped all around me, I asked the apparent team leader if we could get all the ladies together for a big group photo… It took a few minutes, but we did it… how wonderful do they look?

Arriving at the airport

It was smiles all round, and possibly some nerves among the group, but mostly excitement. I feel privileged to have shared a part of their special day and I’m looking forward to meeting them at the airport on Sunday when they arrive home, and hearing about their adventures.

by Scott Proud
No Comments on QUICK UPDATE

First, the team putting the roof on Glamping Hut Two asked us to remove a tree.  NO, Darleen said, I don’t want the whole tree removed. Just remove the branch!

We approached are new neighbour Josie (who is great and deserves his own blog on another day), who came to the rescue. 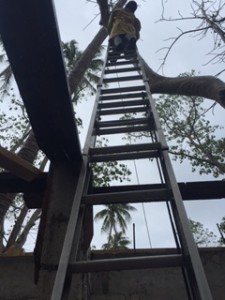 He climbed the ladder, with the chain saw and cut down the tree in pieces.

The top piece was tied to the tow bar of our Isuzu D-Max, and I separated the top piece of the tree after Josie had carefully cut half way through the branch with the chain saw. We did it without doing any damage to Josie, the car … or Glamping Hut Two!

The second significant event for us today, our other neighbour Alan & Bronwyn have departed for a three (3) week family visit in Australia. With Josie also away tonight, Darleen and I are alone in the bush.

The third is a small milestone … the team working on Divi’s Tapas Bar finished the internal rendering this afternoon. It looks great.

We headed back to the Gold Coast (Australia) to take delivery of our second container on Sunday 31 July 2016.  The container arrived first thing Monday morning, and we had four (4) days to pack it before it was scheduled to be collected on Friday morning (5 August 2016).

The morning before we headed to the airport, we shot some more short videos. This is the first, enjoy the tour … https://youtu.be/jMAErpHw3Yg

by Scott Proud
No Comments on NEW FRIENDS

I want to introduce you to Leisong who is a lovely Ni-Van (local Vanuatu resident) from Mangaliliu village (closest village 800 metres to Divi’s). Leisong came with the house we are renting from our neighbour Bob. Leisong is our “house lady”. Hate the term, but that is the way her role is described.

Leisong has separated from her husband, who moved on and remarried. Leisong has two children, Bruce and Presley. Bruce is married to Filima, with two beautiful kids. Darleen employed Bruce back in May to assist with our new chain saw and clearing on the block.

The gentleman in this photo is Chief Mormor from Mangaliliu village. He is 36 and was sworn in as the new chief earlier this year. He has known from a very young age that he was going to be the village Chief at Mangaliliu.

We met with the Chief to discuss our development, and why we employed an outside builder. We wanted to explain we didn’t have building experience like our neighbours Bob and Alan who employed Ni-Vans from the village for their construction. But as soon as the building construction was finished, and the business ready to open, we would be in a position to employ Ni-Vans from the village for many years to come.

Throughout the discussion he was very quiet and measured, but appeared to take in what we saying, and what we are trying to achieve. He came across as on-board with our Divi’s concept.

Love living at Mangaliliu in Vanuatu.

by Scott Proud
No Comments on CONTAINER IS CLOSE …

Great news, the vessel with our container is in Port Vila Harbour this afternoon. As soon as the P&O ship departs (around 5pm), the container ship will dock and our container will be unloaded tonight. We have been told there is a chance the container may delivered on Saturday. That will be a huge relief for Darleen.

It was incredibly special on this day to walk through the wine and tapas building. To see the actual size of each room, the position of the windows and the view from Divi’s bar … WOW!

The wine & tapas building started as a concept we casually discussed as a “WHAT IF”. The concept developed into an image in Darleen’s mind, before she transferred that image to a sketch pad. After several months of fine tuning, we took the drawing to a draftsman who developed a set of drawings to scale.

Now we can stand in the centre of that concept!